A full Moon seen from the space station. The Imaging of the Moon investigation used photos of various stages of the Moon taken from known positions in low Earth orbit to refine the optical navigation algorithms for Orion.
Image Credit: NASA

On its mission to the Moon, NASA’s Orion spacecraft is designed to use NASA’s Near Space Network and Deep Space Network to navigate. But if the spacecraft loses communications with the ground or networks, crews can use a backup autonomous navigation system known as Optical Navigation (OpNav for short). This system analyzes images of the Moon or Earth taken from the spacecraft to determine its position relative to either of those two bodies.

Research currently underway aboard the International Space Station is helping OpNav developers fine-tune the system to ensure crews return home safely. Research Images of the Moon (Moon Imagery) uses pictures of the Moon taken from the space station to calibrate the system software.

“The space station gives us a platform to collect images of the Moon without interference from Earth’s atmosphere,” says principal investigator Steve Lockhart at NASA’s Johnson Space Center in Houston. “We can get pretty decent images of the ground, especially when the Moon is nearly full and high in the sky. The challenge is getting clear images of the Moon in its very thin phases. Because it’s close to the Sun at the time, the sky is only dark enough to image when the Moon is near the horizon, and then you’re looking through a lot of atmosphere.”

The investigation uses two cameras mounted on a plate and spaced about 20 degrees apart. The plaque is installed on the station’s dome, a seven-window observation module, and cameras point to one of the windows that has pure glass for a clearer view. One camera captures images of the stars and the other takes photos of specific views of the Moon. Each specific view is available only once a month for four minutes. The software then uses algorithms to analyze these images and determine the spacecraft’s position in space.

“We know where the space station is at all times and where it was when a particular photo was taken based on when it was taken,” says Lockhart. “The algorithm tells us where it thinks the station is and we can compare it to the actual known location to judge the accuracy of our system.” 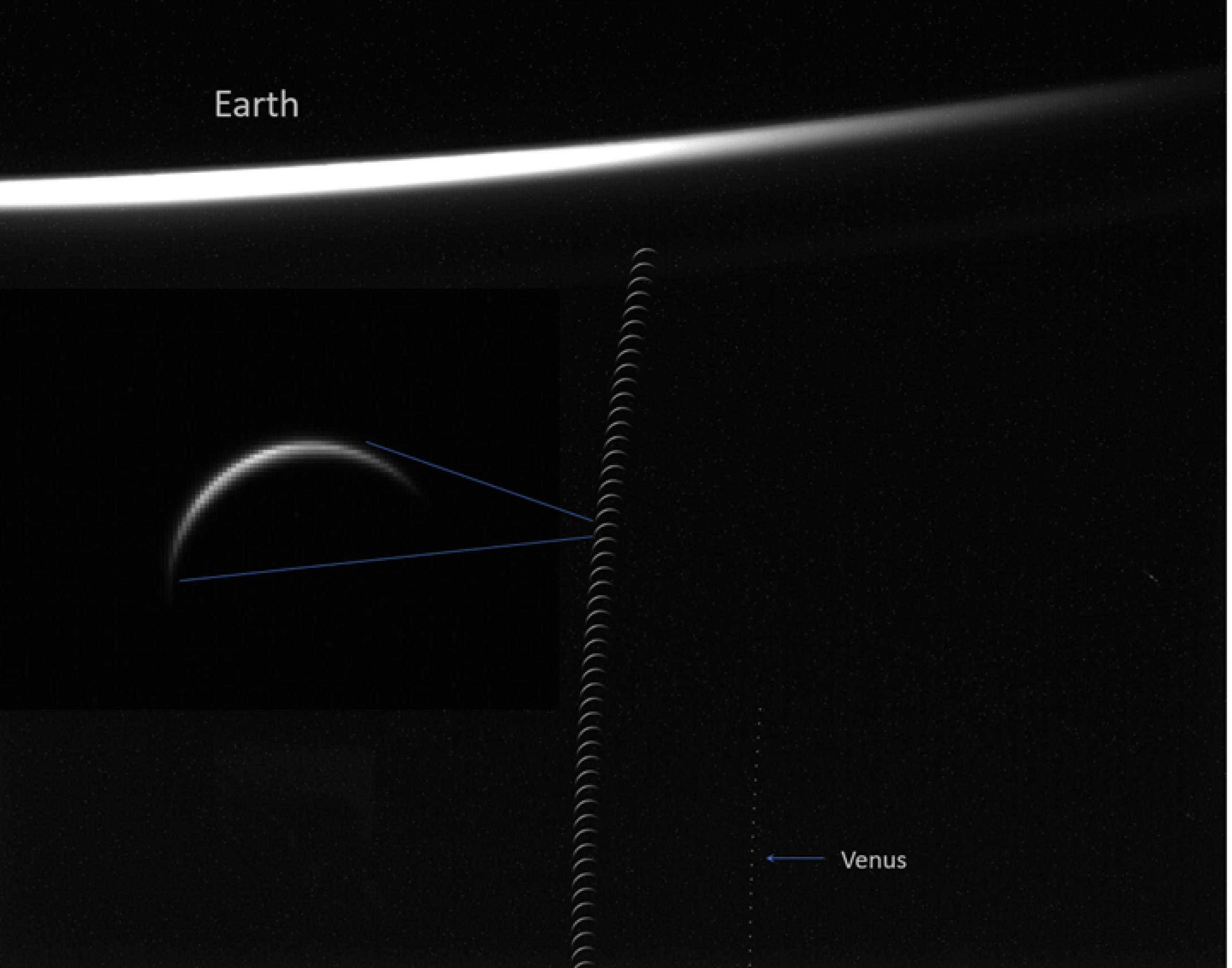 This image is a composite of many individual images captured during one Moon Imaging session, with the Moon arcing across the camera’s field of view. An overlay image taken as the Sun began to illuminate the atmosphere indicates the location of Earth relative to the Moon’s trail. An enlarged image of the Moon was also added.
Image Credit: NASA/Steve Lockhart

The system is automated, he adds. The space station crew simply instructs the camera to point at Earth or the Moon, the most suitable target at the time, to take a series of photos over an hour or so.

Crew members have run four tests for the investigation, photographing an entire 29-day cycle of the Moon’s phases.

Images from the latest test in May captured varying degrees of exposure, from very underexposed to very overexposed. The researchers plan to analyze these images to see if they can be used to determine the range and heading from the space station and, from there, the location of a spacecraft, such as Orion’s position between the Moon and Earth.

That test also captured a very thin crescent Moon, one of the most challenging conditions for the system’s image processing algorithms. The team may improve future versions of the algorithm based on how the system handles this challenging stage of the Moon, one of several goals for the upcoming Artemis I mission.

During trajectory correction maneuvers, Orion’s exterior-mounted OpNav camera will take repeated images of the Moon and Earth for about two hours. These multiple images should ensure Orion’s exact location measurements should the backup navigation system be needed. Knowing the exact location of a spacecraft is essential when redirecting it safely in the Earth’s atmosphere.

Communication and navigation capabilities are one of the key technologies needed for humans to explore deep space. Orion is NASA’s next-generation spacecraft, capable of transporting humans to low Earth orbit and beyond, even to the Moon. Lockhart says that commercial space exploration companies have also shown interest in the autonomous navigation system.

The Imaging of the Moon investigation is one example of how the space station provides researchers with a platform to lay the groundwork for technologies and demonstrations that bring humanity closer to deep space exploration. 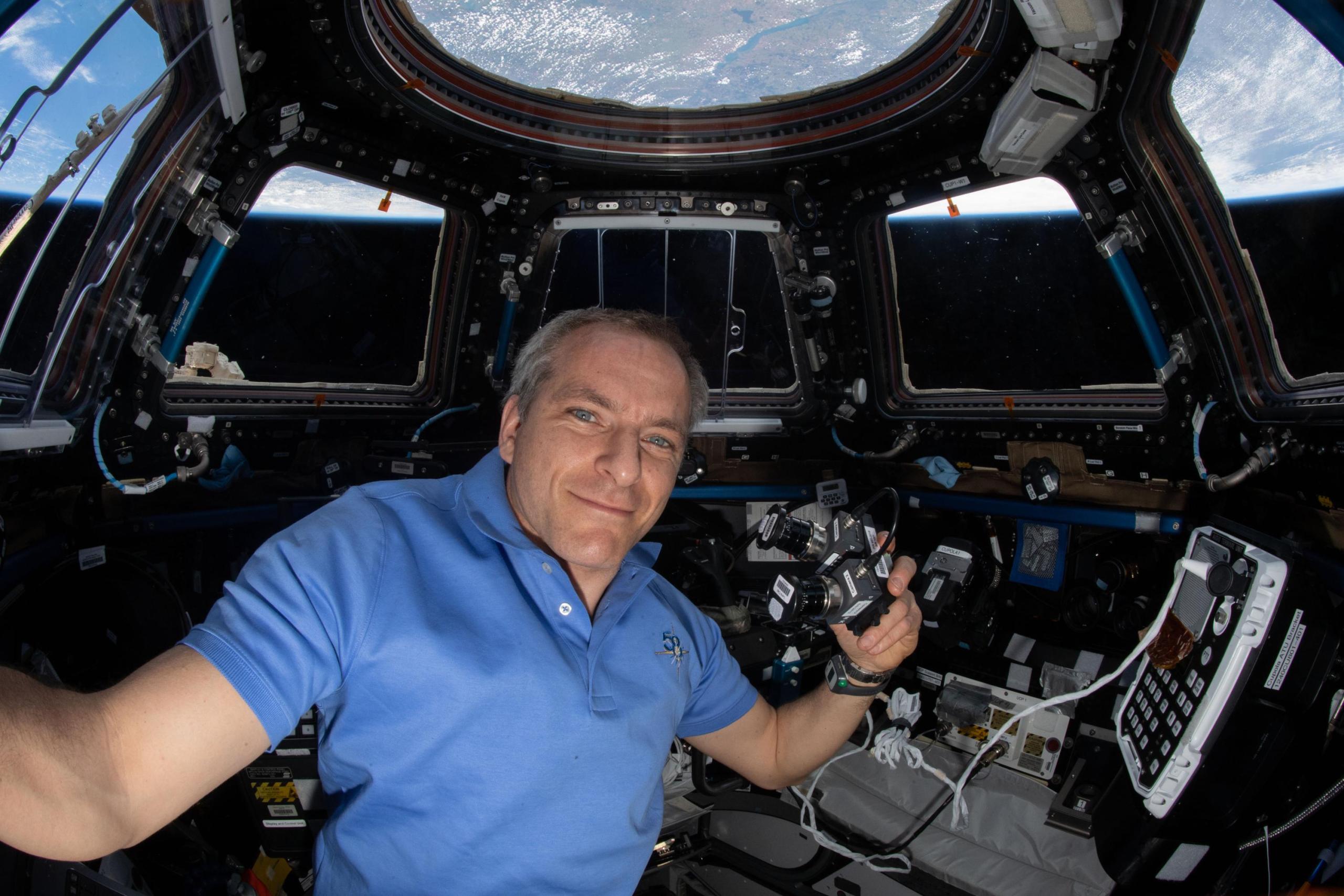 For more news in Spanish, follow @NASA and subscribe to the weekly newsletter here. For more news in English about the investigations aboard the station, follow @ISS_Research Y Space Station Research and Technology News. Follow ISS National Lab for information about their sponsored research. And, for a chance to see the International Space Station pass over your city, view Spot the Station.

Read this story in Spanish here.

now you can format the text from your PC, so you can do it

My 2009 BlackBerry has become a paperweight because time is unforgiving